Below is a very simple overview of Bearded Dragon genetics and a description of the various Bearded Dragon morphs that I am currently producing, including photos from my own collection.
​
*facebook page*

Genotype
A description of an animal based on its' genetic make up
Phenotype
A description of an animal based on its' physical appearance, and it's natural behaviours.
Heterozygous (Het)​
Some genetic disorders can occur in a form that is not visually displayed. These ‘hidden’ genetic disorders are termed Heterozygous, usually shortened to ‘het’. If a dragon is described as X% het for a disorder it refers to the chances of the dragon carrying that disorder, not the percentage of its offspring that will carry the disorder e.g a 50% het trans has a 50% chance of carrying the translucent gene. The opposite of heterozygous is homozygous.
Recessive​
These are genetic disorders which must be carried by both parents for any of the offspring to display the disorder visually. The disorder does not need to be visually displayed in the parents, it just needs to be carried by both, i.e. one or both of the parents could be het for the disorder. Only a percentage of the offspring will show the disorder visually, but the presence of any visuals in a clutch indicates both parents carry the recessive disorder.
Co-dominant / Dominant (Co-dom / Dom)​
These two are genetic disorders that always display visually and only have to be present in one parent to be to be passed on to some of the offspring. If both parents carry the same co-dominant gene, then some of the offspring will also carry the dominant form of the gene.  The two most common co-dominant/dominant disorders are the leatherback/silkback, and the Dunner. These disorders always express themselves visually in a dragon that carries them. If a dragon is not displaying the disorder it is not carrying the disorder. 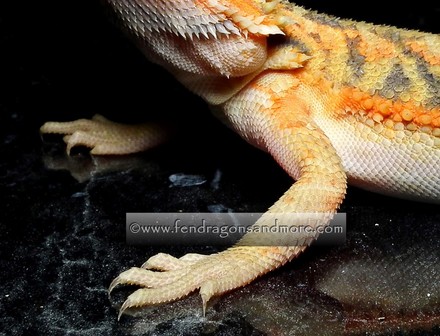 The clear nail trait for hypomelanism
Hypomelanism (Hypo)​
This disorder means a lack of, or diminished dark pigments, and can be most easily confirmed by checking for clear nails. A true hypo will have 20 clear/white nails. A hypo may also display lighter shoulder pads. This disorder can produce the strong reds and yellows in a dragon. It is a recessive gene so can be carried in het form, meaning it can be passed from parent to offspring without either showing any visual signs. 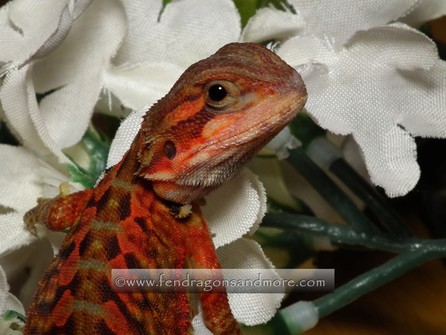 A juvenile translucent displaying the all black eyes.
Translucence (Trans)
​In this disorder the scales are lacking reflective cells and white pigments. It is most easily recognised by solid black eyes. Any patterning can also seem soft at the edges, appearing to be 'underneath' the scales. These dragons are often the most colourful, as the translucent gene tends to bring out the colours more. This is a recessive gene so behaves in a similar fashion to the hypo gene.
Breeding recessive disorders and expected results (all figures approximate).
Normal x het = 0% visual, 50% het, 50% normal
Het x het = 25% visual, 50% het, 25% normal
Visual x het = 50% visual, 50% het, 0% normal
Visual x visual = 100% visual, 0% het, 0% normal

​There are three main scale types, normal, leatherback and silkback. The gene that causes the leatherback disorder is co-dominant, with the dominant or 'super' form being the silkback dragon. This means a dragon cannot be het for these scale types, if it is not displaying the leatherback or silkback characteristics, then it does not carry the gene. 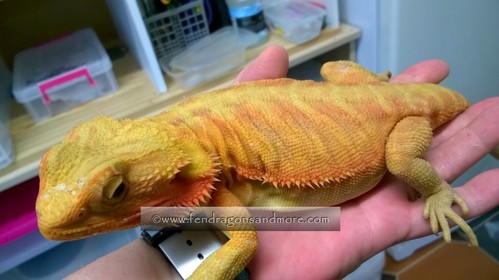 A citrus x red hypo leatherback
Leatherback (Leather)​
This is a co-dominant genetic disorder that is characterised by visibly smaller scales and reduced spikes along the sides and around the neck and beard. The back is also smooth, feeling like leather, hence the name. As this is a co-dominant gene, only one of the parents needs to carry the gene to pass on the disorder to some of the offspring. Pairing a leather with a normal will produce leather and normal offspring. Pairing two leathers together will produce leather and normal scale offspring, as well as some silkbacks, which is the dominant form of the leatherback gene. If a dragon is not displaying the leatherback characteristics, then it does not carry the gene.
Breeding different scale types and expected results (all figures approximate).
Normal x normal = 100% normal, 0% leather, 0% silkie
Normal x leather = 50% normal, 50% leather, 0% silkie
Leather x leather = 25% normal, 50% leather, 25% silkie
Due to their delicate skin, breeding from silkbacks is not recommended. Careful consideration should be given before deliberately producing silkback dragons.

A juvenile Dunner displaying the unique scale form
Dunner
This is a dominant gene so only one of the parents needs to carry the gene for the disorder to be passed on to any of the offspring. This also means that if a dragon carries the dunner gene it will visually display the dunner characteristics. There are several characteristics that identify a dunner. The scales on the beard and belly run in random directions, and the scales on the back and tail are conical rather than the usual ‘teardrop’ shape, giving a dunner a much 'rougher' feel. The toes are longer than usual making the feet look large, and the tail often shows a striped or dashed pattern that runs along its length. If a dragon doesn’t display any of the dunner characteristics it doesn’t carry the dunner gene.
It has been proven that the dunner is a completely different morph to the leather/silkie so leatherback dunners and silkback dunners are possible. 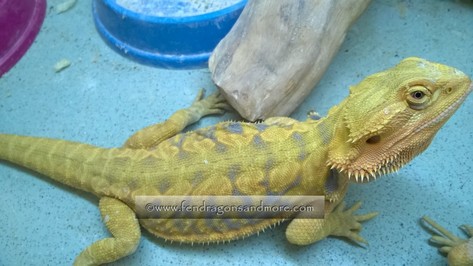 A sub adult leatherback displaying tiger bars
Tiger or Tigerstripe​
This pattern is characterised by dark side bars running down the back of the dragon, often grey, black or blue, and resembling the markings on a Tiger. It is more common in dragons carrying reds or yellows as a base colour, but can appear on any colour. 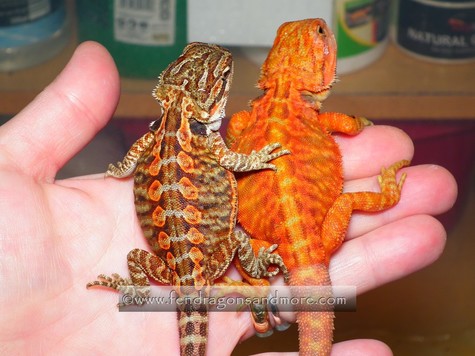 These two baby dragons are both from the same clutch
Colours​
Bearded Dragon colours are produced from a mix of 3 pigments, black (melanin), red (erythrinin) and yellow (xanthinin). Breeders can describe their dragons by any colour or colour derivative they like. This is why there are some really fancy and ‘colourfully’ described dragons on the market, but these are only colour descriptions, not morphs.
A single clutch of baby dragons carrying similar genetic disorders can display a range of colours, shades and patterns, varying from dragon to dragon, depending on how the carried genetics are expressed in the individual. So it is the genetics in the description that are important, as it is how these genetic disorders are expressed that produces the different colours. Breeders will often keep the best and strongest colours from a clutch to try and strengthen the colours in their own bloodlines. For a new owner, picking a colour can be a very personal decision.
So what are my dragons?
​When describing my dragons I try to keep to a standard format which is the colour, then the genetics, then any genetic markers.
I confirm all genetics in my breeding dragons through visual markers or by ‘proving out’ through my own breeding projects. This is particularly important for het disorders that do not display visually.
All my dragons come with a bloodline certificate.
Please note, all the photographs and text on this site were taken/written by and belong to Fen Dragons And More. As such they cannot be copied or distributed, in part or whole, without the owners permission (Copyright, Design and Patents Act 1988).